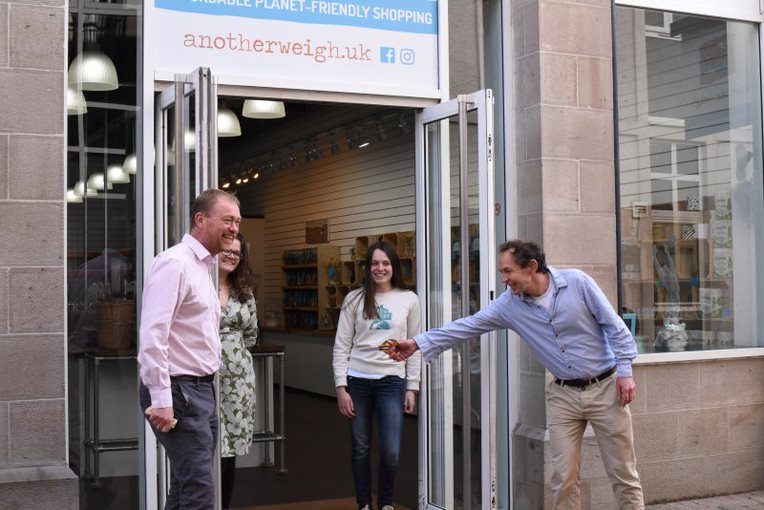 Our not for profit zero waste shop Another Weigh today officially opened its new, larger, premises in Wainwright’s Yard in Kendal. Moving from Blackhall Yard, the new space sees a quadrupling in size allowing more space for customers, products and provides an exceptional shopping experience. In November the Penrith shop also moved to a larger store, moving from Angel Lane to New Squares.

Tim Farron MP joined the Another Weigh team to officially declare the shop open. Commenting he said: “Climate change, habitat loss and biodiversity are the biggest issues we face today. The more people can help to reduce our environmental impact the better. Initiatives like Another Weigh make it easy for people to support the change that is drastically needed so please come and find out how you can take part.”

Another Weigh, which first opened in Penrith in January 2019 and Kendal in December 2019, is dedicated to reducing waste by improving shopping habits towards a more sustainable lifestyle and protecting the planet for future generations. Food and other goods sold at Another Weigh is available loose and customers simply bring along their own, reusable, containers and buy the amount of food needed resulting in no wasteful packaging or food waste. Another Weigh stocks some 400 lines of products including cereals, grains, pulses and legumes, nuts and seeds, dried fruits, baking products, snacks, herbs and spices, cleaning and household products, toiletries.

Zoe Hedges, manager of Another Weigh (Kendal and Penrith) commented: “The new, much more sizable, shops in Kendal and Penrith demonstrate an increased commitment from members of the public to supporting a less environmentally impactful life. The last 12 months have shortened horizons and given people time to think about how they live so not only has shopping local become a focus but also more action is being taken in respect of waste reduction.”

“We need to make sure we are using the earth’s resources efficiently, without destroying what is there and allowing it to heal, replace and replenish. As David Attenborough said in late 2019 – ‘Don’t waste electricity, don’t waste paper, don’t waste food. Live the way you want to live but just don’t waste,’” Zoe continued.

Voted Cumbria Green/Ethical business of the year in 2020 by In Cumbria magazine, the Another Weigh zero waste concept was the original dream of Zoe Hedges and working together with Amy Bray, and her parents Chris and Emma Bray the Another Weigh shops are valued businesses for these two Cumbrian towns.

“Just prior to the devastating effects of the Covid-19 pandemic climate change was one of the top concerns for people around the world. These concerns need to be re elevated and converted into action and commitment not just from governments and corporations but also individuals,” said Amy Bray, founder of environment charity Another Way. “Key ways to achieve this at an individual level is through adopting a more sustainable lifestyle, trying not to do things that have a negative impact on the environment. Our zero waste shops in Penrith and Kendal cover a number of those steps from eliminating environmentally harmful wrapping and packaging such as single use plastic, eliminating food waste by buying just what you need and buying products that are ethically and sustainably produced.”